Justin Strickland from Rural Hall will use the grant funds to expand his beef production sales using e-commerce.

Paul Johnson from Bunnlevel will use the grant to upgrade old poultry houses to produce a top quality bird in a safe environment.

David Pflugfelder from Lillington raises poultry and pork. With the grant funds he will purchase equipment to expand his pastured raised hogs operation.

Rondal McLamb from Dunn produces and processes grain fed cattle and hogs. He will use the grant funds for a dual chamber high volume vacuum.

William Byrd from Smithfield will purchase equipment to expand his cattle and hay production.

Justin Strickland and his wife Jessica purchased Old Holler Farm, a run-down property in Rural Hall, NC in 2014. They have worked to bring the farm back to life, and  currently raise pastured beef cattle. In order to have a steady stream of income they plan to diversify by expanding their poultry operation to produce 250,000 cage free eggs annually. With the grant funds they will purchase additional fences, roosts, feeders and egg storage facilities.

The Harnett County Livestock Association received a grant to purchase portable Livestock Handling Equipment that will be available to producers with small cattle operations. The equipment provides safe restraint for animals during vaccination, castration etc., and also allow a much greater degree of safety for workers.

Louis Tyson, from Ayden, NC was born and raised on a tobacco farm. He has been farming independently for 27 years. He plans on taking 30 acres out of row crop production and turning it into pasture. This will make the current cattle operation more efficient. The beef will be sold locally through a CSA. He will use the grant award for fencing, feeders, water tanks.

Andy Burlingham , an Extension agent in Pitt County office received a community grant to research the longevity and productivity of new forage varieties of grass species that perform better in heat, drought and acidic soil conditions. The forage trial will look at the adaptability, productivity, longevity and digestibility of five species of cool season perennial grasses. These strains represent the newest varieties developed for the southeastern US, and will be evaluated on seven operations across Pitt County. Resulting data and outcomes could help local hay growers produce a higher value product and expand their market.

Alan Sharp from Sims is part of a fifth generation family farm. He received a small grant to market their pork and sweet potatoes to a new customer base through the development of Sharps Farm Sweet Potato Sausage. Alan is working with NCSU Food Science Department to formulate the final product and design the packaging.

Blake Thompson, of Smithfield will use the grant funds to raise pastured pork. This niche market has grown significantly in the past few years and will provide a new agriculture enterprise on the family farm. Blake will sell the pork through a local co-op.

The Cattlemen’s Association of Johnston County received a small community grant to purchase portable cattle handling equipment that can be rented and transported to farms with small herds. The equipment allows the farmer to restrain and safely provide proper care such ear tagging, vaccinating and de-worming. The Johnston County Cattlemen’s Association along with Cooperative Extension and County Government will manage the day-to-day oversight of the program.

Harmony Ridge Farms in Tobaccoville, has a diverse farm operation that includes produce, poultry, Peking ducks and hogs. Kevin Oliver will use the grant funds to expand the duck brooding operation and make the process more efficient.

Master Blend Family Farm, in Kenansville offers free range, all natural swine, and fresh produce. The pigs are born, raised and topped out on the farm. The family takes pride in saying, “From our table to your table.”  With the grant award, they plan to purchase a freezer delivery truck to expand their market area for shipping whole hogs.

Pauline Hylton of Mount Airy received a grant to support a new farm venture. She and her husband Tom inherited the farm in 2013 from Tom’s grandparents. They plan to combine chickens and goats on their pasture and will sell meat at both the farmers market and to wholesale markets. 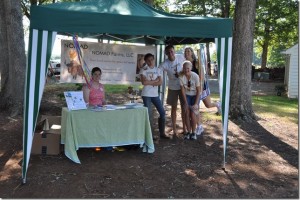 Mark Nicholson of Tobaccoville, and his family operate an educational farm that incorporates rotational grazing techniques they learned while living in the Tibetan Plateau of Western China. With the grant funds they will expand the educational farm tours and offer a semester long farm internship for high school aged students.

Update:  Mark & Dana Nicholson have utilized NC AgVentures funds to successfully host their first summer camp session. This initial camp was used as a trial to gage community interest, and to work through the myriad of details involved in hosting the event. See their webpage: www.nomadfarms.org

Chad Bullington of Pinnacle, farms the same land his parents, and grandparents farmed, but he believes that change is a necessary part of farming. With the grant funds he will purchase equipment to establish a bagging operation to sell small bags of corn and poultry litter, to a niche market of buyers who do not need bulk orders from the mill.

Update: Chad Bullington is working toward getting his project underway. He will begin bagging deer corn when the season presents itself in October. His corn has been planted and is well on its way to a bountiful year. Chad has researched the hopper needed for the project and has discovered that it will be more efficient to build a hopper than to import one. He is working on building the hopper now. (This is largely due to the grant amount was less than what was needed for the hopper originally proposed.)

Business cards and invoices have been designed and created. He has identified the scales needed and will be purchasing them in the next few weeks.

Surry County Soil and Water, N.C. Cooperative Extension, and NC State University Animal Science specialists are working together to further the bagging and selling of the poultry litter. Litter will not be available for bagging until December. At this time, it appears the poultry will be sold as a soil amendment. 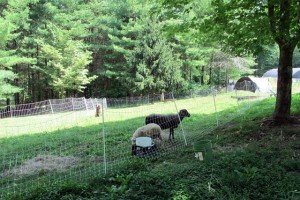 Laura Frazier of Kernersville has built a cottage industry around discarded fleece. She collects the waste wool from two commercial sheep operations and re-purposes the wool into art supplies for artists and for clothing. She markets the wool at local markets and through the internet. She has also created her own line of chemical free wool socks. Frazier plans to buy wool processing equipment and a sock knitting machine. 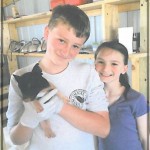 Joey Scott of Lucama and his children have built a reputation and niche market for breeding show quality piglets. They plan to expand their production, and will use the grant funds to build a facility for housing sows and farrowing these highly prized piglets.

Update:  The land was graded, wooden framing raised, concrete was poured, roof completed, metal siding and curtains were installed, electrical, plumbing, and gas heat were installed. Farrowing crates were assembled and placed, heating pads and lights were put in crates. Shelves were built. Fly spray system was expanded from existing barn into farrowing barn. The farrowing barn has been completed and 8 litters of pigs have been delivered. At the Got to be NC Show Pig Sale, June 20th, Ben sold the high selling pig at $1000. 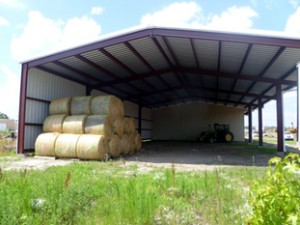 Jonathon White of Greenville, farms with his father on land that has passed down through several generations. They transitioned from tobacco to soybeans, cotton. wheat, corn and hogs and cattle in 2011. They will use the funds to rebuild hay storage barn facilities that were destroyed by a tornado last spring.